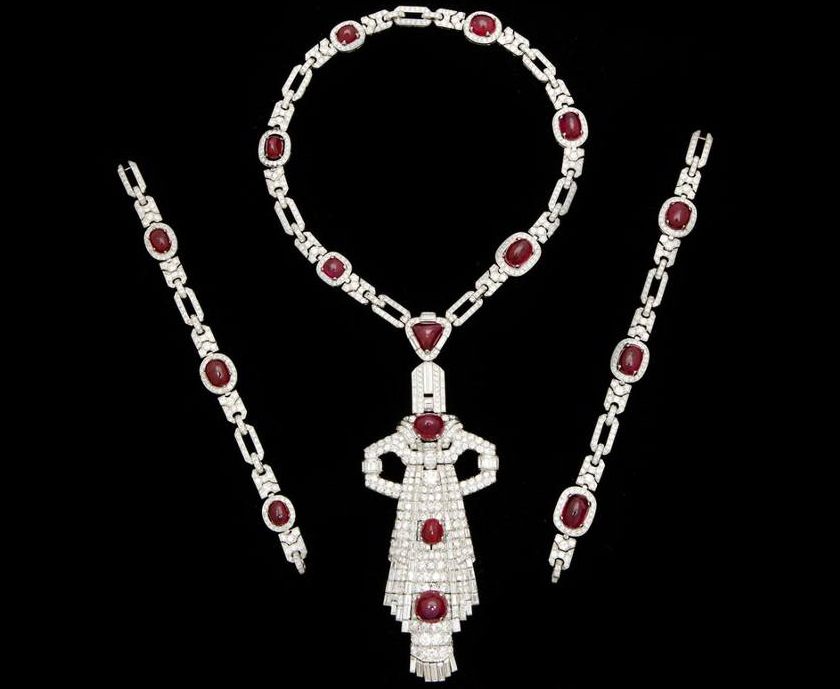 An exquisitely crafted French necklace comprised of four equal diamond-set sections, each featuring three oval cabochon-cut rubies, centering a triangular cabochon-cut ruby, suspending an articulated removable diamond-set pendant featuring three additional cabochon-cut rubies, all in platinum. The 16 rubies weigh, in total, approximately 120cts. and appear to be Burmese in origin (base on hue, tone and nature of inclusions). they show to no evidnce of thermal enhancement. The old European, transitional round brilliant, and baguette-cut diamonds totaling, approximately 39.70cts. appear to be on average in the "G" range in color and the "VVS-VS" ranges in clarity.The sautoire can be worn at varying lengths, depending on how many sections are used. The individual necklace sections can also be worn as bracelets. Each section measures approximately 175mm (length) x 15mm (width) and the pendant measures 132mm (Height) x 49mm (Width). It is extremely rare to see a piece of this magnitude survive in pristine original condition. The piece bears French assay marks for platinum, as well as partiall obscured maker's marks, workshop marks and inscribed numerals (related to the original manufacture)

(All stone weights, olor and clarity grades are approximate, as stones were not examined out of mounting)